Wounds of ‘West Side Story’ remedied by 2021 remake 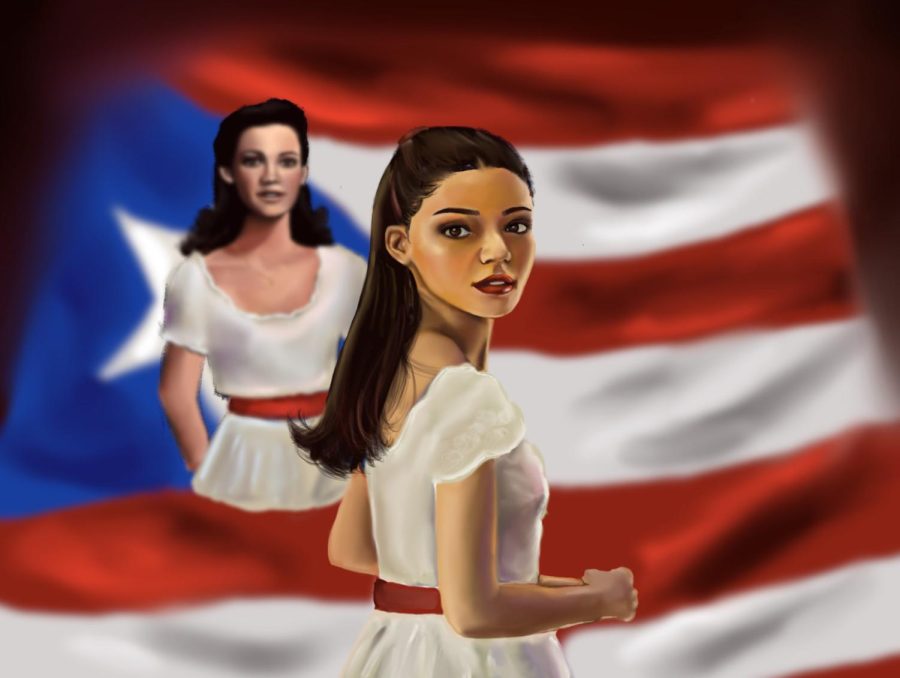 “America” boomed in movie theaters across the country once again since 1961. In December of 2021, Steven Spielburg’s ‘West Side Story’ remake was released in the U.S. The film was highly anticipated due to buzz surrounding the improvements reported to have been made in relation to problematic elements of the original 1961 version. Featuring a new, diverse cast and iconic actress from the original film, it was bound to seize the attention of old and new audiences alike.
The original ‘West Side Story,’ released in 1961, was highly praised for its effect on the movie industry featuring notable elements of superlative and slightly experimental cinematography. Its wide aerial shots, flamboyant imagery, and vivid mood-oriented lighting make it a remarkable film, though, not without criticism. In an interview with the Washington Post concerning the original ‘West Side Story’ film, award-winning Puerto Rican filmmaker and professor Frances Negron-Munataner comments on the portrayal of characters describing, “The other lead characters that were Puerto Rican — Bernardo, who is the head of the Sharks, and Maria, who is the female lead — were both cast as White actors in brown face.” The use of brown face and thick, exaggerated accents would prove the film to be problematic in its portrayal of Latinx people—especially when white people were used in place of Latinx actors.  In addition to the inaccurate mannerisms and visuals, Frances continues to say that in the film “Men are gang members, and women are either virginal or spitfires.” The aggressive, sassy, and “spicy” narrative pushed onto the personalities of Latinx people has been played out for far too long and the roles the characters take on contribute to the stereotype. Puerto Rican actress Rita Moreno who starred as Anita was even encouraged to accentuate her accent making a mockery of Latin accents. Overall, the inaccurate portrayal of Latinx people in the original film has resulted in the reinforcement of racist stereotypes.
The ‘West Side Story’ remake attempts to make amends to the original film and its problematic elements—which is carried out quite successfully. It features a more diverse Latinx cast starring Puerto Rican Rita Moreno as Valentina and Colombian Rachel Zegler as Maria. Afro-Latina actress Ariana DeBose stars as “Anita”—the character played by Moreno in the original film. The casting of an actual Latina actress to play the iconic role of ‘Maria’ is pivotal to steps taken to support accurate portrayal and diverse casting. In the original 1961 film, Natalie Wood, a white woman, takes on the role of young Puerto Rican Maria who falls in love with a member of a rival gang. Having a lead actress who is actually Latina allows for representation and more accurate portrayal. It allows young women of color to see themselves in the media they consume and having relatable figures in the limelight.
“West Side Story” also explores complex relationships between men and women including machismo and overprotective figures. Machismo is a prevalent occurrence in Hispanic culture resulting from patriarchal ideals of men having to be strong, independent, emotionless, and even overbearing when it comes to their relationships with women. This becomes prevalent in Maria and her brother’s relationship. Maria is a young woman craving more independence and her brother, Bernardo, is a more traditional male figure who wants to protect her and preserve her from the corruption of the world.
Positive cultural impact is evident in the new ‘West Side Story’ film with its inclusion, diversity, and exploration of cultural phenomena. Although it certainly is not perfect and audiences are able to agree there are problematic elements to the storyline and plot of ‘West Side Story’ itself, the remake features significant advancements which prove that cinematography is moving in a direction will promote representation so all viewers are able to see themselves in the characters on the big screen.