Deck the halls with finals freakouts 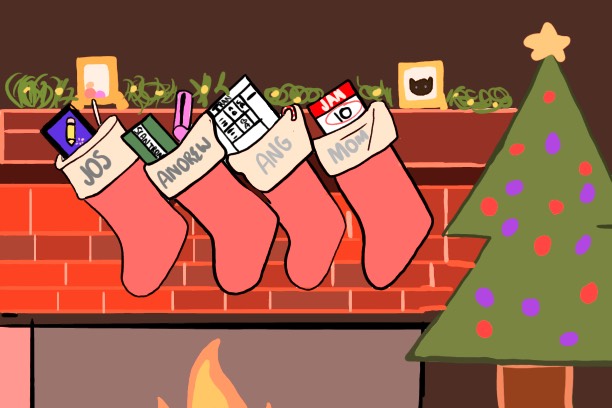 Semester finals are necessary in refreshing and testing the knowledge obtained by students during the past semester. However, after the COVID-19 Pandemic and three semester finals being cancelled, it was new for the majority of the students, resulting in a lot of uncertainty and stress.

“Finals, like all exams, can be a stressor for students,” said school counselor Mrs. Claudia Carone. “However, they are still an integral part of a college prep curriculum. The school provides a number of resources to try to mitigate those stressors. These include encouraging students to meet with teachers regularly, utilize study guides, meet with peer tutors, and meet with their counselors.”

Sophomores were in the same position as freshmen this year, not having taken any semester finals.

“Final exams were quite stressful,” said freshman Hailey Ferrara. “They were the first finals I ever took, and we didn’t know what to expect.”

However, many resources were offered including COCA, COOKIES, AND FINALS, for freshmen and sophomores to study and ask their teachers and LINK Leaders questions regarding material they were unsure about.

In comparison to many schools in the local area, Saint Viator is one of the only high schools that has semester finals following Christmas break. Out of 36 staff members that took a poll on whether they would prefer finals before or after break, only 25% said that they would prefer to have finals after break.

“I would prefer to see finals before break,” said math and personal finance teacher Mr. Joseph Miller. “It maintains continuity between the learning and the test as well as the fact most do not want to study during break. Thus, they are forced to spend the week before finals re-familiarizing themselves with the material rather than actually preparing.”

“It also allows for a clean break and students can decompress over break without the stress of finals week hanging over their heads,” said Miller.

“I was pretty nervous for finals this year because I hadn’t really remembered how to prepare for them and manage my time after not taking them for 2 years,” said senior Claire McDermott.

“Having finals after break creates a lot of unnecessary stress during the Christmas break,” said junior Patrick Schraeder. “I would rather have a fresh start right after the holiday.”

“It’s hard to balance studying and having regular traditions my family and friends would do over Christmas break,” said freshman Anna Vernoski.

On the other hand, some students do not mind having finals after break.

“I had much more time to study, to relearn the material that I learned from a semester’s worth of classes,” said freshman Caroline Schermerhorn.

“There would be too much cramming,” said Fuja.

Mrs. Fuja has taken finals before break and she said it was quite stressful. The benefit of Christmas break is significant to organize and work on study guides and reviews.

Despite the difficulty of finals, students agree that their teachers prepared them with helpful reviews and study guides, limiting the amount of stress and promoting success for finals.

“It seemed that many teachers recognized our unfamiliarity with the layout of finals, and gave us an idea of what to expect on the exam,” said Schraeder.

Another factor that took a lot of weight off of students’ plates was the schedule of two exams per day for four days.

“Because we got out every day at around 11:00, I had a lot of time to review for my finals that I had the next day,” said Schraeder. “Having this much time also gave me time to relax after finals, and get my mind right for the next day.”

Also, it allows for breaks in studying instead of cramming multiple subjects into one night.

“The hardest thing about finals is getting yourself motivated,” Schraeder said. “From experience, the best way to combat this difficulty is making a plan that works for you. Personally, I found it easiest to study a little bit each day so that I wouldn’t burn out.”

Although finals are difficult and stressful leading up to them and preparing for them, it is necessary and important to prepare for future summary exams, like college exams.

“Having ripped off the Band-Aid, I am hoping the stress of the unknown is removed and students can understand and develop their own process to budget their time and achieve success on their finals,” said Mr. Miller. It should also impress upon them the importance of their semester’s work as they strive to build themselves a little cushion above their desired grade heading into finals. All are skills that will be important for the remainder of their high school careers and in college.”