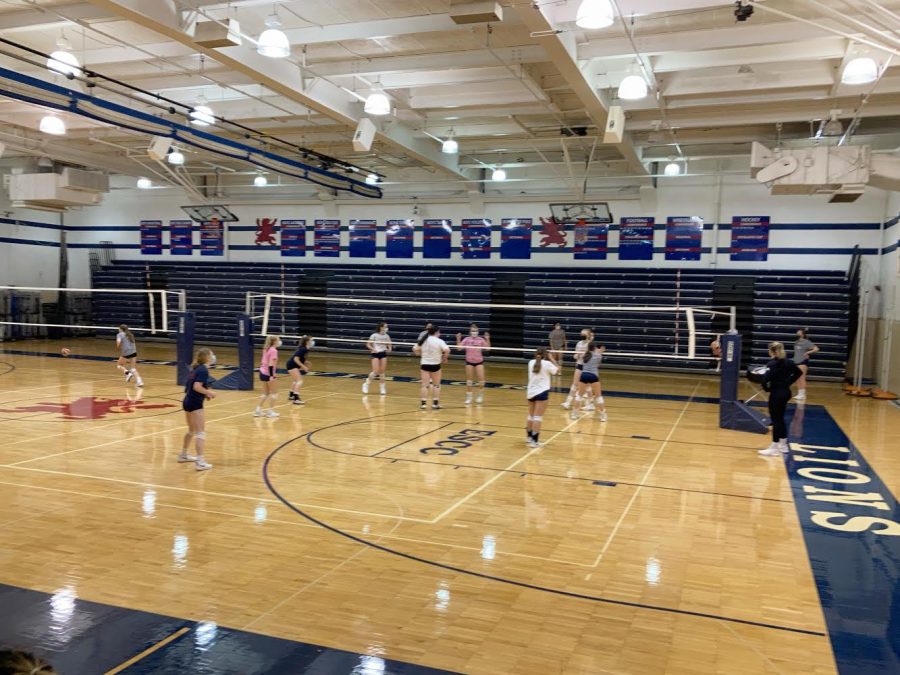 For most of the year, there was no sports life at school. Most student-athletes came to school without their sports bag, the back parking lot was mostly empty minutes after school, no shouting or cheering came from the gyms, and buses from away games no longer pulled in the school at ten at night. However, after-school athletic life is returning after the IHSA’s recent decision.
At the end of January, the IHSA announced their plan for high school sports. Winter sports were allowed to have a short season. Fall sports that were unable to occur during the fall because of their risk level were moved to the spring season which began for most in early- to mid-March while spring sports were pushed back to begin in early April for a summer season. Both spring and fall sports seasons are being shortened.
Most student-athletes are relieved that the IHSA has cleared up uncertainty and confirmed a plan for their sports seasons.
“I am so glad we are getting a season,” said junior Dave Orecchio who plays football and lacrosse. “For a while, we didn’t know if we had a season or what it would look like, but the IHSA’s plan at least lets us play a shorter season.”
The revival of high school sports also benefits student-athletes who want to play at the next level in college. The new schedule allows them to get back to playing and showcase their skills.
“The new schedule allows me to participate in both school and travel soccer,” said junior Quentin Perry who plays soccer and runs track. “Having the ability to get a lot of games under my belt will prepare me for the college camps I have in the summer.”
Realizing the challenges associated with the overlap, athletic director Mr. Jason Kuffel addressed concerns and issues with an email to the students. Mr. Kuffel encouraged student-athletes to focus on academics first, finish their current seasons, only participate in one intense practice or game a day, and ensure they receive enough rest and recovery. Safety from COVID is also a priority.
“Please be diligent regarding social distancing, wearing your mask, [and] washing your hands,” said Mr. Kuffel. “[Make] positive choices about social gatherings so we can provide the maximum number of practices and events without having to pause activities for positive COVID tests.”
Student-athletes also understand that open communication will be essential during the overlap.
“It is going to be tough trying to balance school and sports with this new schedule,” said Perry. “Track and travel soccer are at the same time, so I might have to go to back to back practices. I’m going to communicate a lot with the track coaches to develop a schedule that works for me.”
While some student-athletes need to answer the question of how to deal with an overlap in sports, others are questioning if the new schedule is fair. Last March, as restrictions due to COVID-19 were established nationwide, students who participated in spring sports lost their opportunity to play for the whole season. With the new schedule, many of the same athletes are now having to play a shorter season in the summer because fall sports are occurring in spring. For some, this new schedule makes them feel cheated out of a full season yet again.
“I think that it is unfair for all spring sports seasons to be pushed back by fall sports to summer and shortened,” said junior Claire McDermott who plays soccer. “There are other challenges to playing in the summer because it is hotter than usual and people, especially with jobs, have obligations over the summer that might be hard to reschedule or miss.” Other student athletes that benefit from the schedule feel conflicted. “Obviously it is nice to have a soccer season this year, but I really feel for the spring sports,” said Perry. “The spring sports barely had a season last year. I wish we were able to have fall sports at their normal times. I was really confused on why our governor halted sports here, when every other state did it successfully.”
However, most student athletes find the new schedule to be imperfect but most fair. “It would not be fair to cut out certain sports seasons,” said Orecchio. “Especially for athletes who only play one sport it would not be fair to them to not give them a chance.” Once again, student-athletes in the era of COVID-19 have to look on the positive side.
“It does feel unfair sometimes,” said McDermott. “But I am more grateful that we get to play during [the pandemic] than anything.”