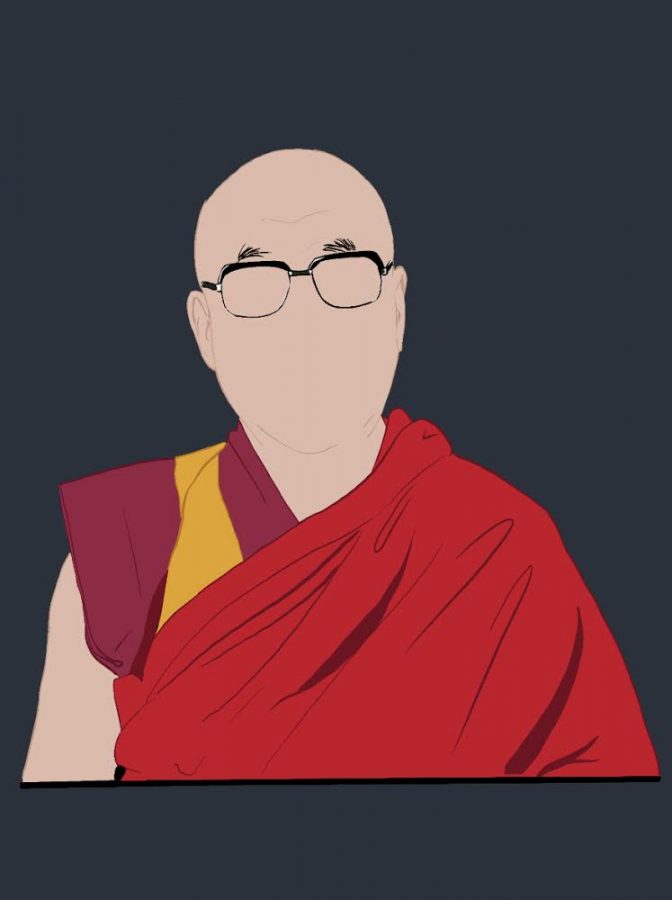 Catholic students are often not familiar with the idea of reincarnation, but to Buddhists and Hindus, it is integral to life.The next reincarnation of the prominent Buddhist figure, the Dalai Lama, has become more controversial and unusual as an important date draws near.

The current Dalai Lama, Tenzin Gyatso, has set his 90th birthday as the date he will select his successor. It is still unknown whether he will come from Gyaso’s native land of Tibet or his current home of India.

The Dalai Lama is the highest spiritual leader in the Gelug or “Yellow Hat” school of Tibetan Buddhism. For many years, the Dalai Lama has come from Tibet, but that might change due to the current situation in Asia. In 1951, the People’s Republic of China annexed Tibet. At this time, the Dalai Lama, along with many of his advisors and loyal followers, escaped the Chinese government and possible assassination by fleeing to Dharamshala, India. Upon arriving there, he formed the Central Tibetan Administration, which is a Tibetan-elected parliament. The Chinese government has said that if the next Dalai Lama is from Tibet, they will assume government influence over him. Because of this claim, the 14th and current Dalai Lama is also considering choosing his successor in India. This would not be the first time this happened in the history of the Dalai Lama. The 6th Dalai Lama, Tsangyang Gyasto, was from a region of India known as Tawang.

The selection process for the reincarnation of the Dalai Lama can happen in one of three ways: first, the current Dalai Lama can choose his own successor; secondly, the successor can be discovered by a designated group of Buddhists while the current Dalai Lama is still alive; and finally, the most common method is to begin the search for the reincarnation after the death of the Dalai Lama. This child must be born within a year of the Dalai Lama’s death. Search parties may  follow signs from previous Dalai Lamas, or high level monks and priests will go to a sacred lake in Tibet and meditate for a vision of where to find his successor. The gathered children—most Dalai Lamas are chosen at a young age—participate in a series of tests, including choosing objects that belong to their predecessors.

According to Britannica, Tenzin Gyatso was selected by a regent after the 13th Dalai Lama died in 1933. After Tenzin Gyatso became ordained as a Buddhist monk, he began rigorous monastic education in preparation for his duties as Dalai Lama. The regent carried the responsibility of holding Tibet’s neutrality during World War Two. At the young age of 15, Tenzin had to assume the role of head of state because of the looming crisis in newly-Communist China. Throughout his life, Gyatso was constantly intertwined with political problems. In 1959, rumors spread about the Chinese government’s plan to kidnap the Dalai Lama and led to an uprising in Lhasa. Fortunately, he was offered asylum by the Indian government and was able to avoid the possibly catastrophic conflicts in Tibet.

“If a situation like this happened in my faith, Catholicism, I wouldn’t want my religion to be to be controlled by the government and be potentially influenced by politics under the government control,” said freshman Francheska Davis.

“While we would sometimes like religion to operate separate and above all the messiness of humanity, all religions operate within the realities of our broken world,” said Discipleship teacher Ms. Kristin Scandora. “It is always problematic when governments attempt to exert control over religion and religious leaders for political goals.”

Though the topic of the Dalai Lama’s reincarnation has grown more tense, the decision will not be made for many years. Tenzin Gyatso is 85 years old and in good health. As the Tibetan people, Dharamsala Buddhists and the Chinese government wait for his decision over the next five years, many things could change. But the one thing we know is that the Gelug School of Tibetan Buddhism will continue to have faith, no matter where the Dalai Lama comes from in the world.