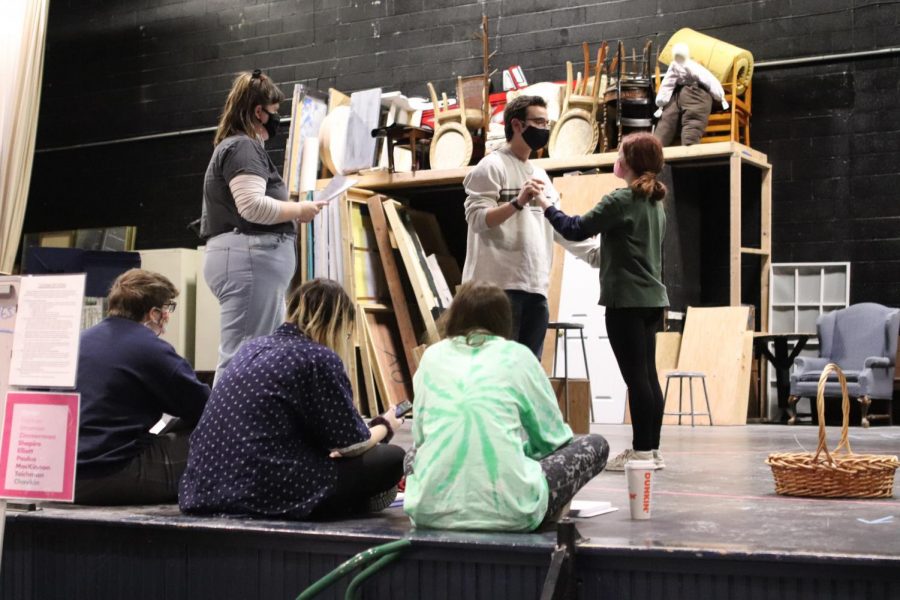 As the annual winter musical season makes it’s prolonged arrival, new challenges await the cast and crew in the midst of the COVID-19 pandemic.  In contrast to previous musical productions, “Into the Woods” will feature the presence of two directors.  Ms. Megan Gray, Mrs. Kate Costello’s successor, has shown her skill and creativity in the fall play “Girls in the Boat.” The second director is infamous and unwelcome—COVID-19. Ms. Gray and Mrs. Joleen Kragt, head choir teacher and musical director, must overcome the challenges of the pandemic, leading to major changes to the delivery of this year’s musical, “Into the Woods” .

With COVID-19 regulations in place, the performance will take on an innovative set of opportunities. For instance, actors are required to spread six to eight feet apart from each other, and masks may be worn for a majority of the performance depending on the restrictions of acting outdoors. Further, according to Mrs. Kragt, unlike previous years in which up to 220 students auditioned, this year only saw around 50 auditions with a cast of just 30 members. The intimate conversations and relational pathos of the performance will face some altering, as cast members won’t be able to maintain a close parameter like they used to.

“We are truly sad that we can’t stage the huge Viator musical,” said Mrs. Joleen Kragt. “However, this year’s performance will be a brand new opportunity and is looking up to be a true masterpiece.”

The musical this spring will be a unique experience compared to years past. Moving the musical from winter to spring may not seem out of the ordinary, but performing the musical outside in the front parking lot rather than in an indoor theater is no minor setback.

“Our purpose is to find space for safety as well as make the story believable by maintaining connection between the characters,” said Mrs. Kragt.

However, the change to a smaller cast was controversial as many students could not participate in the production as ensemble members.

“Viator musicals are known for being huge ensemble productions,” said junior Rory Whetstone who will play Stepmother. “I wish that more of my friends could have joined to be in the ensemble.”

Though the smaller cast yields some negatives, students in the musical anticipate various positives in the new atmosphere.

“I think with the more tight-knit group we can make closer friendships,” said senior Sophie Limberakis, who will play Cinderella. “I think we will have a lot to bond over this year doing the musical under these restrictions.”

Amidst the many unprecedented circumstances, this year’s choice of musical will work particularly well. The score of “Into the Woods” is composed by Steven Sondheim. Mrs. Kragt noted that Sondheim’s zestful compositions and complicated song patterns are what make his musicals, particularly this one, shine amongst an abundant array of others. This musical is capable of holding a tighter crew and will clearly benefit from an outside performance, as the atmosphere will be real in the truest sense. With an intricate melody of song numbers in addition to the natural aesthetic of the outdoors, this musical will pose as a one-of-a-kind experience.

“What I’ve noticed particularly about this year’s cast is that there is a bold sense of intellect and leadership that is key to performing a musical in regards to the unlikely occupancies of this pandemic,” says Mrs. Kragt.

When uncertainty strikes out of nowhere, only an intuitive cast can serve to maintain the composure of a successful performance. Therefore, the ability to adapt to any and all scenarios is the saving grace to these trying times. Students showed their ability to adapt to the new restrictions immediately through auditions.

“Auditions were different this year because

we needed to wear masks and be socially distanced throughout the whole process,” said Limberakis. “However, they went well and we were still able to do group callbacks so the directors could see how we all worked with each other.”

In all, students in the musical find it most important to remain excited and positive during the process.

The performances will be held between a span of four days (April 15-18) in the corner of the front parking lot.

“I am so excited to see ‘Into the Woods’ come together,” said Limberakis. “I can’t wait to see how we pull this off during strange times and I hope that we are able to inspire other schools to do the same.”