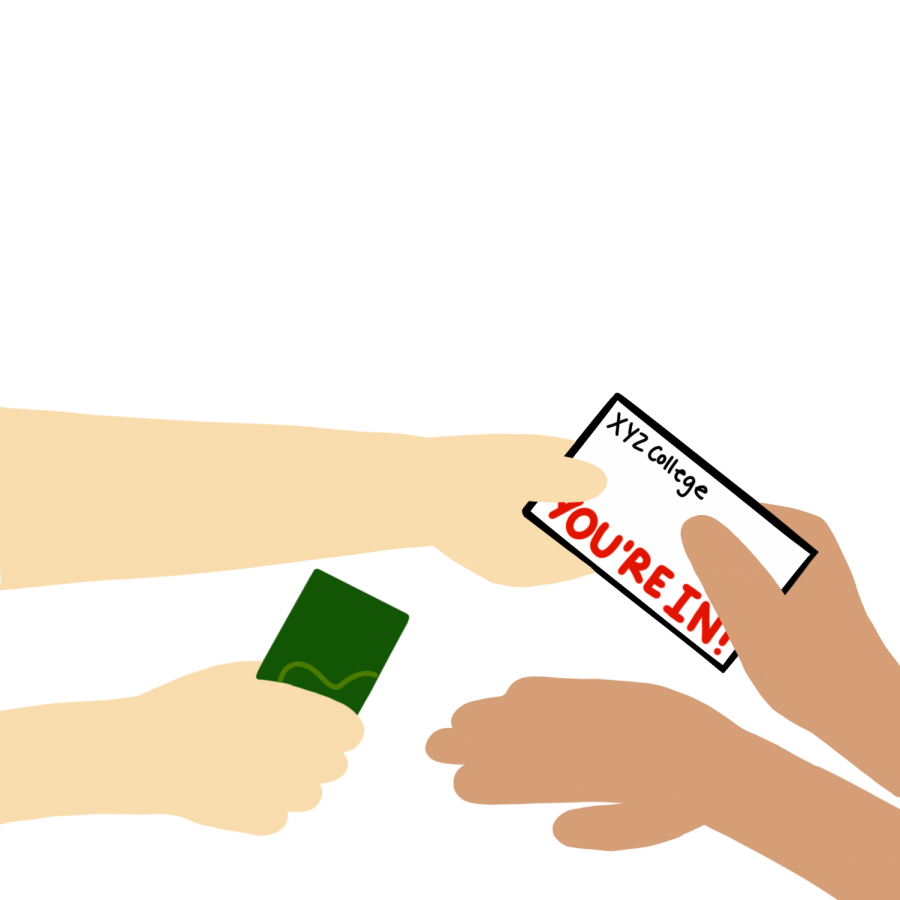 For years, students from high-income families have gained an advantage in the process of college admissions. The advantage comes two-fold: from “standardized” tests and application tutors, more money means less problems for an applicant. A typical ACT test costs $46.00, and according to U.S. News, the average application fee is $43. From the beginning, before any acceptances or financial aid, the costs start to pile up, leaving students without disposable savings limited to a certain amount of standardized tests and applicable schools.

Ultimately, because students are able to improve their ACT score with the help of some cash, the ACT has become much less of the “standardized” test it was created to be. The concern then arises of if standardized tests are even a worthy measure of a student in college admissions. Given this inconsistency, “test-optional” (students have a choice to submit test scores) seems to be the perfect option.

“Test-optional policies are always a good thing, but test-blind (test scores are not considered as a part of the application) policies take it too far,” said Herbert.

Not requiring tests relieves the pressure off of a wide variety of students, whom may feel their test score is not an adequate reflection of themselves. While income plays a large part in testing, a uniform test can serve as a great barometer for students whose grades do not quite reflect the mastery of standardized skills. Across high schools, grades can also become inflated, distorting the value of a true “A” grade. Standardized tests can assist certain students’ profiles in national relativity as a piece of their college application puzzle.

When junior year nears its end, thoughts of the future begin to race around students’ heads. Acceptance into “Top 20 Universities” becomes the primary goal of many competitive students around the nation. This ambitious aspiration has become a catalyst for the exponentially increasing competition in college admissions. Students turn to summer programs, essay-writing classes, and college admissions tutors–all of which require some sort of payment–to give themselves a leg up.

“I hired a private tutor because I did not feel comfortable with my understanding of college admissions at the time,” said senior Abby Longstreet, “I am the oldest child, so it helped put my parents at ease too.”

In a world of increasingly difficult college admissions, hiring an expert seems like the most reasonable option to navigate the process.

“The role universities play is three-fold, but ultimately colleges are business and money is a driving force,” described Herbert. Herbert further disclosed that many top-tier universities have done a much better job in recent years in providing low-income students with enough need-based aid without loan. This not only initiates a better relationship between universities and underprivileged students, but also reduces the growing national problem of student loan debt.

However, according to the Department of Education, students from low-income families graduate at a significantly lower rate than their advantaged peers. Jenny Anderson of Quartz introduced Ivonne, a student from Texas, who was accepted into the University of Texas at Austin (UTA) within the auto-admission program. When taking her first calculus course at UTA, Ivonne immediately felt out of place. Her high school calculus class did not even compare to other high school calculus courses that were offered in Texas and nationwide. Ivonne was unprepared and unmotivated for the next four years of college.

Mrs. Herbert described that colleges fall short in their outreach to underprivileged students.

“Some students can’t even visit campus before their first day of class,” said Herbert, “Making sure all students have the same exposure and the same access to resources is vital.”

Mrs. Herbert also described a summer bridge program she helped administer to offer low-income students a trip to campus and a tour.

Like most major problems of inequality, the solution is not readily available. Often, the problem starts at the root of development and grows more apparent over time. In the case of economic status and college admissions, students from lower-income families are less prepared for college from the moment they are born.