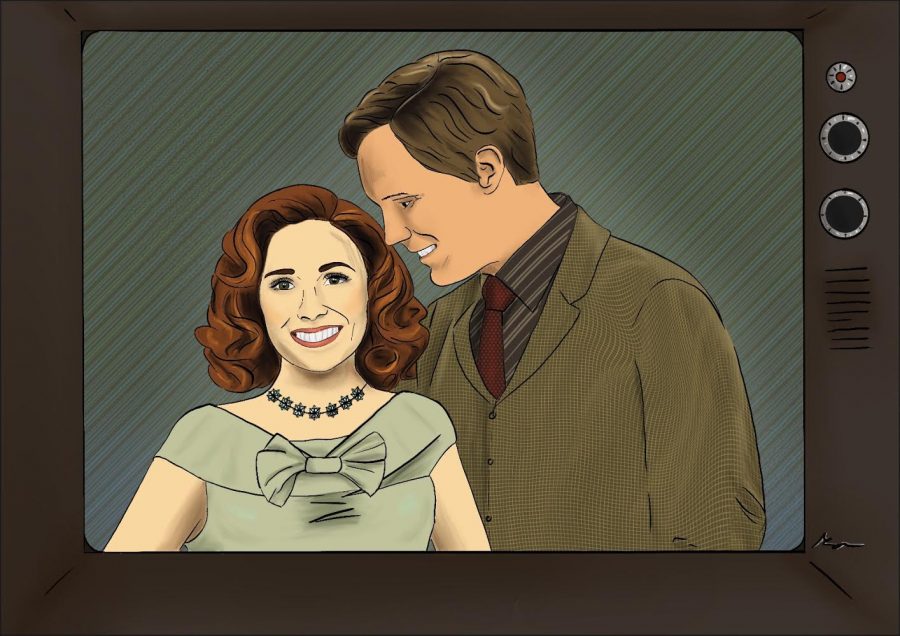 After a climactic battle between the Avengers and the mad titan Thanos and the loss of many beloved characters, the future of the Marvel Cinematic Universe has been left uncertain. Before 2021, there hasn’t been a new addition to the franchise since the second Spider-Man film, “Spider-Man: Far From Home,” was released in 2019. Ever since the success of Disney+, the MCU has decided to release their own original shows, beginning with the mystery sitcom “WandaVision.”

“WandaVision” follows Wanda Maximoff and Vision, played by Elizabeth Olsen and Paul Bettany, as they embark on their new lives together in a small town called WestView, New Jersey. The show leaves the audience in complete mystery as to what happened to the couple after the events of “Avengers: Endgame.” Although at first glance Wanda and Vision are living their dream lives in the suburbs, all is not as it seems. They begin to suspect their lives to be a facade as they see strange objects fall from the sky and hear mysterious voices from the radio. As they question the entire world around them, the audience catches glimpses that Wanda knows more about the outside world than she appears.

Along with the super-powered couple, “WandaVision” showcases the comedic return of Dr. Darcy Lewis from the “Thor” movies and Agent Jimmy Woo from “Ant-Man and the Wasp.” Darcy and Jimmy attempt to solve the mystery of WestView from the outside by catching signals from the town in the style of an old sitcom. “WandaVision” also surprises the audience with the return of Monica Rambeau from “Captain Marvel” and a surprise cameo by a beloved character from the “X-Men” franchise.

Although many fans went into “WandaVision” with doubts and uncertainty, the show has received much attention and praise from the general fanbase.

Junior Geo Andino said that he is “interested to see how the sitcom style of the show plays into the overarching story behind the beekeeper, the crazy voices and Wanda’s self awareness within the meta of the show.”

Throughout the progression of the show, many mysteries seem to be solved, but even more remain unsolved. Fans patiently wait for the upcoming finale of “WandaVision” in order to finally have answers to their long-standing questions.