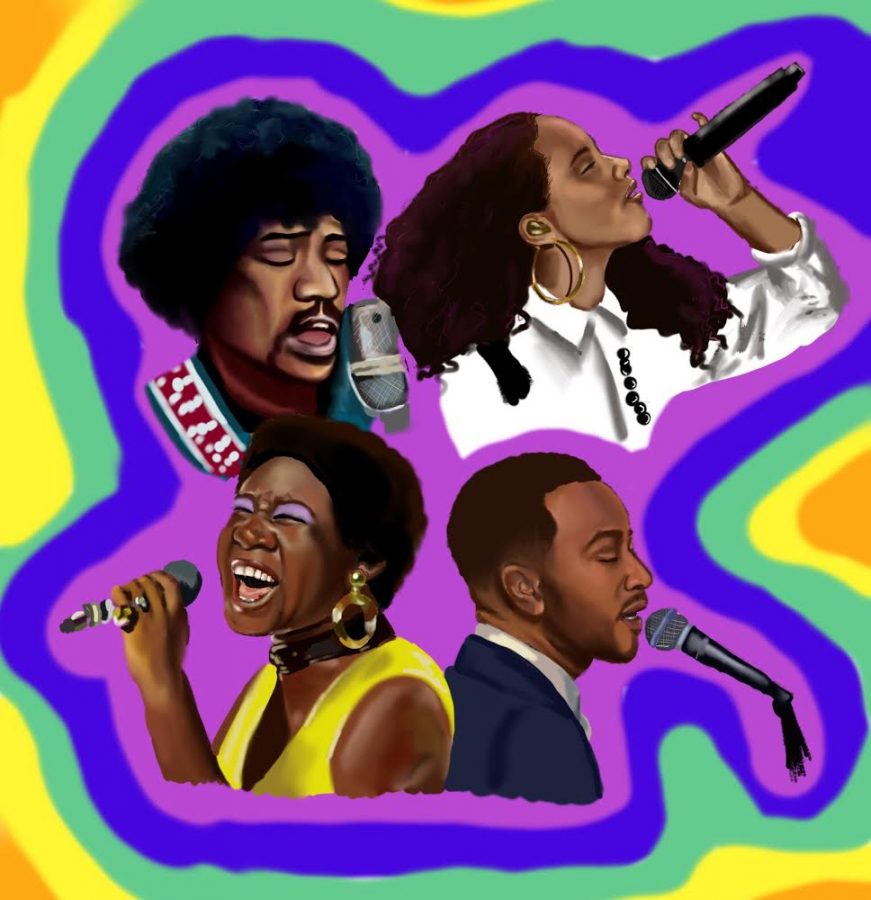 African American musical influence in America is traced back to the transatlantic slave trade. Africans were forcibly moved and left to carry their history with oral traditions. Song aided enslaved people with communication. Historically, black people in America used their traditional instruments and musical techniques to express pain and record their new experiences. From the time that African music culture had been unwillingly integrated into the country, there have been many black musicians who have used their voice through song to express their universal experiences as black folk in the United States of America. While the names of musicians in the 1700s cannot be credited, their influence lives on with musical artists that share their progressive energy.  Black culture can be accounted to originating genres of jazz, rhythm and blues and rock. Notable black music artists are to be celebrated all year for their accomplishments and continuation of the genres and their unifying messages.

Defining the rock and roll genre, Jimi Hendrix was best known for his self-taught electric guitar playing. According to PBS, Hendrix stated that his music and his performance expressed himself and communicated better than conversation. He was prevalent in the 1950s and is highly regarded for his confident and entertaining stage presence.

Chuck Berry also greatly contributed to rock music with his combination of blues and country sound. His detail and creativity in songwriting made Chuck Berry an inspiration for rock artists to come. In the 50s, Chuck Berry’s notable and clear pride of being a black man was important to progress racial standards and appreciate the differences that black people have in America.

Jazz music was notably developed in the early 1900s by Louis Armstrong. His trumpet and raspy voice allowed him to become a nationwide success. He is regarded as one of the first expressive jazz soloists on stage. Armstrong used his platform and fame within the music industry to speak out for desegregation in schools.

“I know that there are bad forces, forces that bring suffering to others and misery to the world,” said Coltrane. “I want to be the opposite force. I want to be the force which is truly for good.”

The Queen of Soul, Aretha Franklin, was highly valued while advocating for the Civil Rights movement and for women’s rights. Her song, “Respect,” became a popular theme for movements and marches, and Franklin elaborated upon the importance of her song’s message in her memoir.

“It [reflected] the need of a nation, the need of the average man and woman in the street, the businessman, the mother, the fireman, the teacher–everyone wanted respect,” said Aretha Franklin. “It was also one of the battle cries of the civil rights movement. The song took on monumental significance.”

The pop music genre was strengthened by Prince’s vocal versatility, inventive lyrics, and powerful stage presence. According to CNN host, Van Jones, Prince had a much greater impact on this world than his music; Prince was a charitable man that never gave himself credit for his contributions of large donations and personal service to those in need because he was a Jehovah’s Witness. Prince is responsible for creating “YesWeCode,” a technology company to work with less-fortunate children and “Green For All,” an environmental organization for expanding green energy.

Artists today such as John Legend and Alicia Keys continue the legacy of expression and representation in the music industry. Alicia Keys has an empowering female perspective as she regularly speaks out about her experience of gender and racial inequality. Her songs “We Gotta Pray” and “Perfect Way to Die” reference the realities of police brutality and systemic racial issues. She released the single “Good Job” last spring to show appreciation of hard-working healthcare and essential workers. John Legend is known for his charitable acts to fight for injustice; he created “The Show Me Campaign” to break the cycle of poverty rooted with systemic issues by funding education for the poor and disadvantaged. His music is an encouragement toward activism with his award-winning song “Glory” that speaks on racial inequality and inspiring lyrics of “Preach” which emphasize taking action toward the change that he wishes to see in the world.  It is important to listen to these artists and their message to better understand the inequity that is endured in the United States.