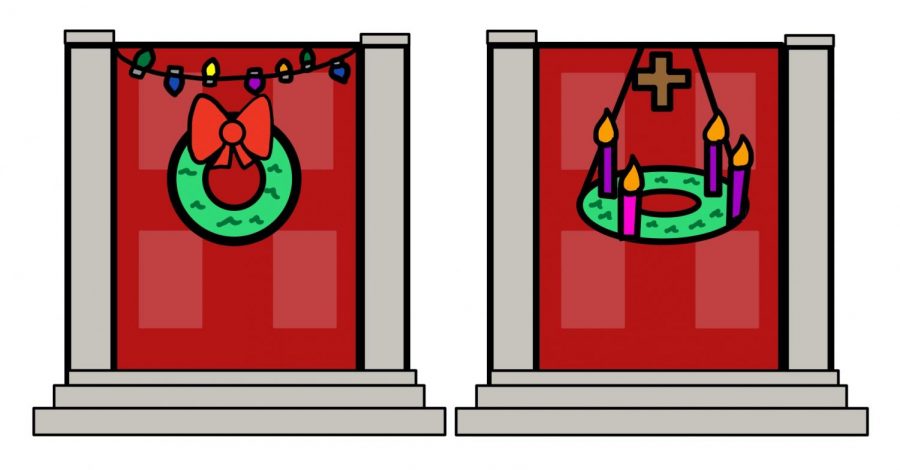 The Christmas season has single-handedly taken over December and late November. How could it not? It’s a time of baking sweet treats, decorating houses in red and green and sipping on Starbucks drinks in seasonal cups. Christmas rolls around each year and hits the world like a storm, and it seems like people often forget it’s not the only important celebration in December. Not everyone was raised – or has adopted the tradition – to celebrate Christmas, so should one really wish everyone they meet a “Merry Christmas,” or is it better to play it safe and say “Happy Holidays” instead?

Christianity is where Christmas stems from, and is the most practiced religion in both the U.S. and the world. Christianity’s popularity aided in the commercialization of Christmas, even though other religions have their own practices. Though they are more prominent in other countries, Judaism, Islam, Buddhism, Hinduism and many more are very much alive in the modern world. None of these groups celebrate Christmas; they have their own sets of special days throughout the year. For example, Judaism celebrates Hanukkah in the month of December, which usually falls near Christmas. One will see the occasional decoration stamped with a menorah, dreidel, or even the Star of David, but that’s about as much as there is in an everyday department store. It also isn’t common to see people walking around and wishing each other a “Happy Hanukkah,” so why do people insist on saying “Merry Christmas” instead? The simple answer is that Christmas has become so commercialized in the world that it has moved past the realm of religion for many people, and it is seen as a family day rather than a Holy day. Although “Happy Holidays” is the more politically correct and inclusive term, the lines between greetings have become blurred.

At the end of the day, it’s about balancing preference and making sure that others’ preferences and beliefs are respected. There’s nothing wrong with wishing someone “Merry Christmas” as long as that’s what they’re comfortable with, but keep in mind that not everyone thinks the same. Greetings are simply that, greetings, and they can make someone’s day a bit brighter. After all, we all need a little bit of holiday love at the end of this year.