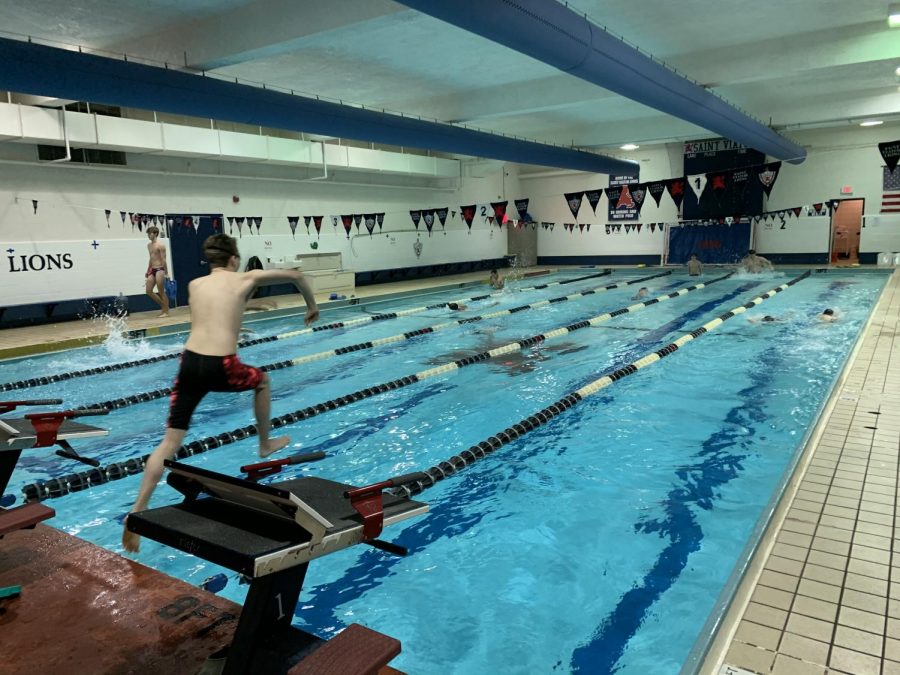 Members of boys swim team warming up at practice.

When the IHSA decision came out stating which fall sports could compete and which couldn’t, many were outraged.  Soccer, football, and volleyball athletes were all anxiously awaiting their seasons only to have them be postponed for months.  There is a silver lining to this however as some of these athletes took advantage of their now empty seasons and joined new sports.

Both the boys and girls swim teams gained new members for the year, after popular sports including girls volleyball and boys wrestling and basketball were postponed.

The cross country team in particular gained a significantly larger number of members this year due to other sports being postponed.

Freshman PJ McLeod intended on playing football in the fall, but decided to look for a new sport to play in the now-vacant football season.  This led him to join the men’s cross country team.

“In retrospect, joining cross country was a really valuable experience for me. It gave me some ideas of what being on a high school sports team would be like, and in particular helped me to condition for other sports,” said McLeod.

Rowan McDonnell, a junior on the soccer team, also decided to join the men’s cross country team this year when the soccer season was postponed.

“I’m glad that I had the opportunity to run cross country because it helped me stay in shape and still compete during the pandemic,” said McDonnell.  “I was able to grow closer with my new teammates and improve in my athletic abilities.”

The woman’s cross country team also gained some new members this year, one of whom was Liv Salituro, a junior whose club soccer season was put on hold due to COVID.

“I am glad I had the opportunity to join cross country because it has always been in the back of my mind but I never really had the chance to try it out or explore it until this season,” said Salituro. “Joining cross country has definitely benefited me…and will continue to do so not only because of the physical strength it gives you, but also the positive mentality to push through the pain.”

As the pandemic progresses and sports continue to be postponed, students should look for new ways to get involved in order to make the most of the opportunities available during this hard time.