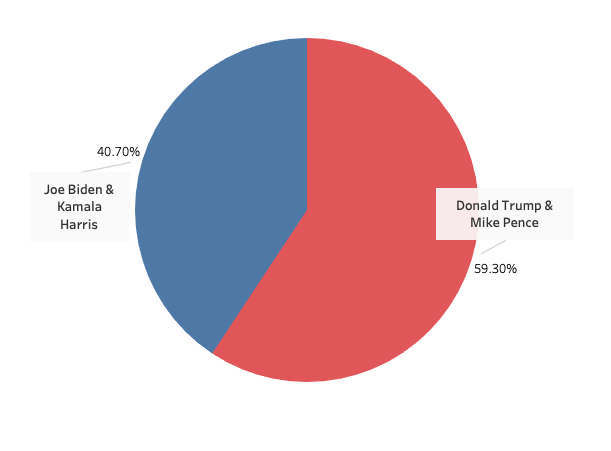 Illinois has never proved to be a threat in surprisingly swaying the presidential election. Since 1992, Illinois’s majority has consistently voted blue, according to 270 to Win, so the outcome of its electoral college votes is easily predictable. Early polling determined a significant lead for Joe Biden, and Illinois continued to follow that trend.

Stemming from the 2000 election, the divide between the Republican and Democratic parties has solidified, according to Edward McClelland of Chicago Magazine. The political party divide also caused an ideological association with each of the parties: Republicans claim conservatism while Democrats claim liberalism. With the growth of division between the two political parties comes the attraction of news sources that tend to have an ideological bias for voters. According to Pew Research Center, 65% of Republicans trust Fox News for their political and election news, whereas 67% of Democrats gravitate to CNN.

The Democratic Party has consistently been the party of city dwellers, attaining majority votes in New York, Los Angeles, Chicago and other large cities around the country. Adopting progressive ideals, the Demoratic Party is attractive to the populous and diverse communities seen in cities. According to McClelland, Chicago suburbs have followed that trend, becoming pro-choice, pro-gay rights, pro-government and pro-gun control. Southern Illinoians have rejected the Democratic Party for those same beliefs. Franklin County, about 300 miles south of Chicago and socially conservative, considers the Democrats as hostile to Christian values and leans Republican.

Only thirty minutes outside of Chicago, Saint Viator is a geographically political anomaly. From the results of the Viator Voice poll, 58.9% of students would vote for President Donald Trump, whereas 41.1% of students would vote for Vice President Joe Biden if given the opportunity to vote in the 2020 election. The most important issues for students are the economy, coronavirus, racial inequality, and abortion.

“As the economy is currently struggling, I believe that a strong economy is important for the recovery of our nation and essential for us to reach the point of ‘normal’ we are used to,” stated a student response in the Viator Voice election poll. As agreed upon across political ideologies, a functioning economy is integral to the success of the United States. The controversy lies in the potential success of each candidate’s plans. According to Marketplace, Biden plans to raise taxes on Americans making over $400,000, make public colleges’ tuition free for students with families making less than $125,000 and raise corporate tax rates from 21% to 25%. While in office, Trump has lowered corporate taxes from 35% to 21%, and he has promised a “Tax Cuts 2.0 plan” that could provide a 10% cut for middle-income taxpayers.

“COVID needs to be handled safely and in accordance with science. The current administration has proved that they cannot control the spread or save lives,” explains a student response regarding coronavirus. Because coronavirus affects nearly every part of Americans’ daily lives, it is a pressing issue across the nation. Supporters of Biden are often dissatisfied with the way Trump handled the initial wave of the virus and express concern for possible worsening conditions. Supporters of Trump tend to worry about the effect of shutdowns in states that will harm the economy and disproportionately affect certain economic groups.

The racial inequality consensus among students is that racism has persisted far too long to not be addressed. With recent protests and riots stemming from the death of George Floyd, the attention towards and awareness of racial issues is at the forefront of the election. Nationwide, 52% of voters consider racial and ethnic inequality to be “very important” in determining their vote, according to Pew Research Center.

“Abortion is a very controversial subject that needs to be covered more besides occasionally mentioning Roe v. Wade,” said a student response from the poll. Because Catholicism holds the right to life as sacred, it is likely that Catholics will choose to vote for candidates with that shared interest. Trump has expressed support for a total ban of abortion, excluding cases of rape, incest or danger to the mother’s life. During his first term, Trump has installed three conservative judges into the Supreme Court in an attempt to potentially revisit Roe v. Wade and other significant abortion cases. Biden wants to pass a federal law that protect’s a woman’s right to an abortion, according to BBC.

Fortunately, American democracy has provided every citizen with the inalienable right to vote, so regardless of location, each individual has an opportunity to be represented in government. In a constant pursuit of improvement, it is up to younger generations to vote towards the betterment of the country, and as seen in the 2020 election, every vote counts.