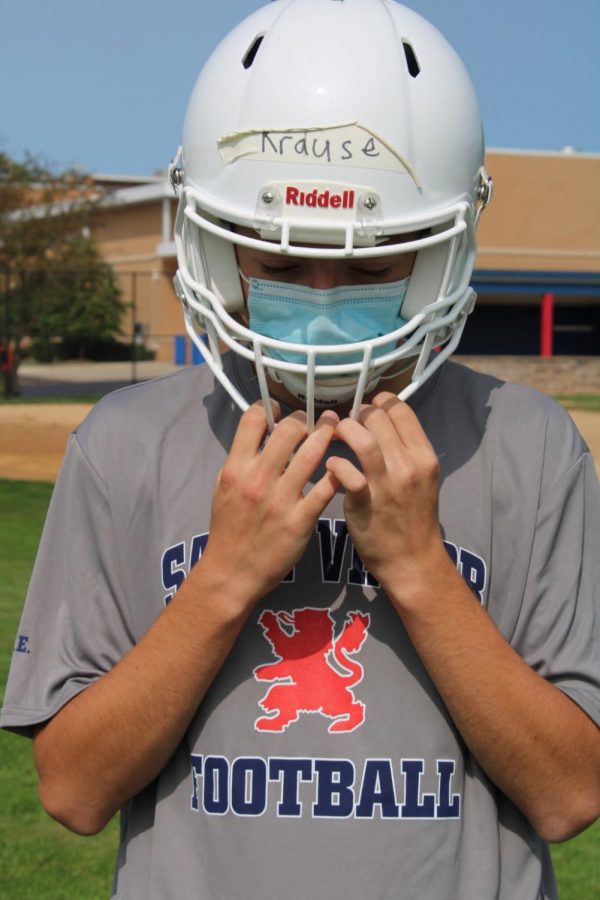 Sophomore John Krause wears a mask while practicing at a contact day.

On a normal fall Friday night, students would pack Forest View Stadium to anxiously watch the football team from the stands. However, this is far from a normal year with far from normal circumstances.

On July 29, student athletes across the state waited nervously for a decision by the IHSA dictating whether their sport would be eligible to play. For most athletes, this announcement bore a crushing disappointment, with only four sports being granted a fall season (girls swimming and tennis and boys and girls golf and cross country).

Sports like football, girls volleyball and field hockey, and boys soccer (typically played in the fall) have now been pushed to the spring season, and sports such as lacrosse, baseball, softball, track and field, girls soccer and boys tennis have been pushed to the new “summer season”.

“The postponement of [these sports] has created an unfamiliar void in our entire community,” said athletic director Mr. Jason Kuffel ‘99.

Football games in particular were a huge part of student life and were an opportunity for students to feel a part of the community.

“I loved watching the games and hanging out with my friends,” said junior drum line and pep band member Ronan Valera. “They were a great way to end the week, and I wish we had them going on right now.”

“Losing Friday night football is tough since it is unique within athletics and because it brings people together in such a fun atmosphere,” said varsity football coach Mr. Dave Archibald. “But we’re greatly hoping to have the game day experience again for two seasons in 2021.”

Though seasons have been postponed, athletes have been given the opportunity to practice with their teams with 20 IHSA-sanctioned “contact days” until Oct. 31. This gives athletes the opportunity to get stronger before the season and to have a regained sense of the team dynamic. However, with the recent temporary shut-down of school due to an increased number of confirmed positive COVID-19 cases, many of these opportunities have been cancelled.  The shut-down has also abruptly hindered the seasons of active fall-sport athletes, who, in several cases, have been stopped from competing in their championship competitions and meets.

Coach Archibald hopes that moving the season to spring will actually be beneficial to his players.

“We will be a stronger and smarter team since we are getting extra time to lift weights and still have some practice time this fall,” said Coach Archibald. “The weather is another thing that many are talking about because of starting games in March, but really it will just be the opposite of the norm–it will be cold early in the season and get better as we go on.”

“I am extremely impressed with the support we have shown each other and how we have rallied as a community,” said Mr. Kuffel. “Our coaches and student-athletes have valued the adversity and risen above negativity that has occurred during this time.”

Although much regarding the upcoming sports seasons remains unclear, players and coaches continue to maintain an optimistic outlook.

“As a team we have taken the mentality that we are going to control the things we can control and make the most of the situation,” said Coach Archibald. “Losing the fall season is difficult for certain, but we are always going to look ahead and work to improve and grow in all the ways we can. When you lose something, even for a time it helps you realize how blessed you were to begin with.”