Global political and social scenes panic while searching for a cure 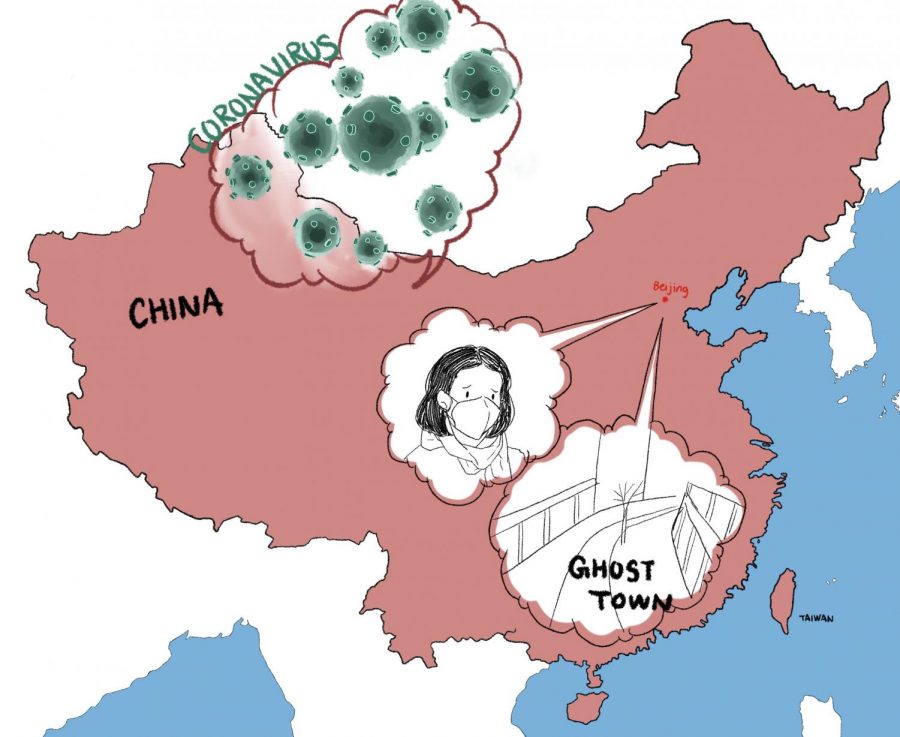 The Chinese city of Wuhan was widely unknown to the majority of the global community until a bombshell headline was thrown to the forefront of journalism just a few weeks into 2020. A highly contagious disease, the Coronavirus, has emerged from the streets of Wuhan and has seen tremendous growth as it spreads not only to Chinese citizens, but to residents of other countries. The Coronavirus has already had a significant effect around the globe and continues to cause high levels of panic. This alarm has caused multiple countries to ban travel to China and restrict any flights from China to enter their airports. According to the CDC, severe travel restrictions concerning China have been enacted in Russia, Japan, Pakistan, Italy, Australia, and the United States with many nations to follow soon. Most travelers, regardless of their destination, are required to undergo screening and examination to monitor the virus.

“It’s crazy to think that something that seems to only happen in movies is actually happening in real life” said junior Amy Leonard.

Millions of people travel to and from China everyday which makes the virus a more prominent threat. The effects of the Coronavirus are especially dire in the country of origin. According to the World Health Organization, there have been 563 confirmed deaths in China and the disease has spread to 16 other countries.

These numerous deaths have not been felt at such a global scale since Cholera is another contagious disease that causes diarrhea and if left untreated, can kill a person within a matter of hours. During the 19th century, it spread in India killing millions of people, and then in Peru during 1992. Most recently in Haiti, the disease in 2010 killed 9,000 people and it claimed 775,000 more in April of 2016.

While the world is not unaccustomed to pandemics, seen most recently in the Ebola and H1N1 influenza outbreaks, the emergence of the Coronavirus has more fear surrounding it due to its potential to spread to other countries rapidly. Ebola, similar to the Coronavirus, is spread when an affected individual makes contact with other people, particularly if they were bleeding. The major outbreaks of this disease were in West Africa in 2014 which had the most attacks and in April 2016, when 11,300 people died and 28,652 were infected.

In addition to the rapid outbreak of the Coronavirus, smallpox has also taken a toll in less developed countries specifically located in East Asia relatively recently. The biggest case of smallpox was in 2006, in Dacca, Bangladesh, in which 46% of the people infected died. This disease originated 3,000 years ago in India or in Egypt. Fortunately, in 2007, the World Health Organization, the same group of professionals who is seeking a vaccination for the Coronavirus, officially stated that after a decade of vaccinations, the disease was eliminated worldwide.

“The best way of prevention is handwashing. People have gotten lazy and use hand sanitizer instead” said anatomy teacher Mrs. Paula Nicolau.

The Chinese government has been trying to contain the disease by quarantining fifteen Chinese cities including Wuhan. Business Insider reports that there are currently approximately 50 million people on lockdown in China. Leaked footage from the iPhones of Chinese citizens shows neighbors being forcefully taken from their homes by authorities, trucks with multiple body bags, and deserted streets.

“Diseases that spread so fast really scare me, especially since my family is in another country,” said sophomore Christine Chen.
The economy of China has taken a brutal hit as well during the outbreak. The Wall Street Journal states that many corporations China relies on for profit such as Apple and Tesla, have halted business in the country and are looking for alternative locations in other countries. On February 3rd, CNN reported that the Chinese stock market fell 7.7%, which would total about $445 billion in market value.

These detrimental effects of the Coronavirus have impacted the Lunar New Year celebration that was set to take place around January 25th. Chinese news sources have informed the public that China’s State Council actually extended the celebration period until February 2nd and halted the start of new school semesters, ultimately leading to a total quarantine in over thirty Chinese cities.

Over the course of the next few months, the Coronavirus will continue to test global health officials and organizations as well as continue to hinder recreational travel attempts until a vaccination has been found to reverse the detrimental disease.