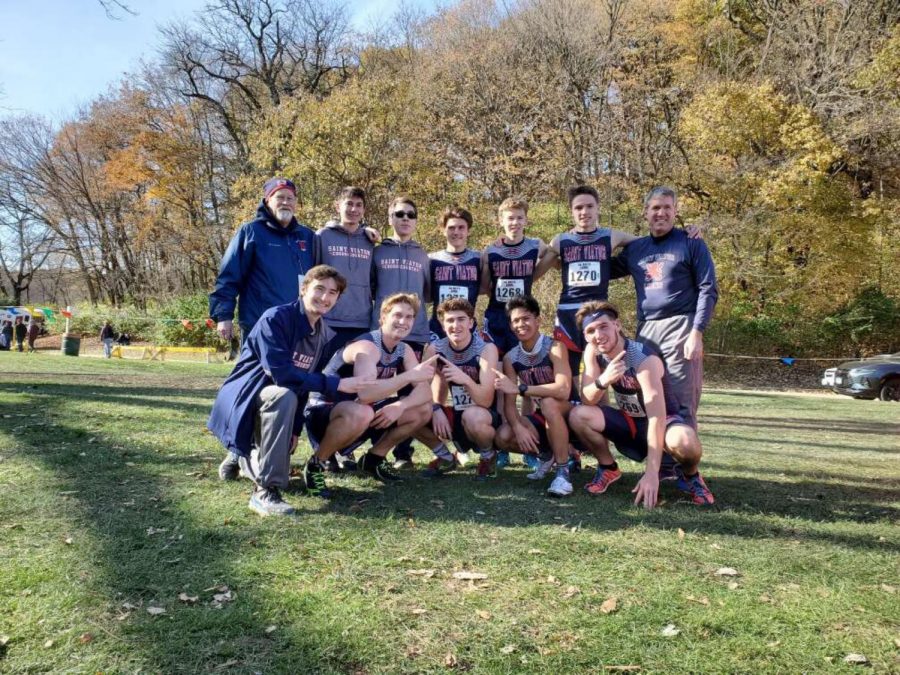 The boys cross country poses at the IHSA State Finals in Peoria.

On Oct. 17, the Chicago Teachers Union (CTU) began a strike against Chicago Public Schools (CPS) that would ultimately persist for 11 days. The CTU hoped to obtain higher salary raises and benefits, smaller class sizes and additional school resources, such as counselors and nurses. Because of the strike, over 350,000 CPS students were kept out of the classroom, and one group was hit especially hard: student athletes.

Due to sanctions by the Illinois High School Association (IHSA), thousands of CPS athletes were deemed ineligible to compete in athletic competitions while the strike persisted. This barred teams from holding team practices as well as competing in any pre-scheduled games or matches. CPS girls tennis and volleyball and boys soccer teams were both disqualified from advancing to their respective IHSA State Finals.

At Lake View High School, the varsity boys soccer team was anxious for their chance to compete at the state level after winning important games before the start of the strike and being seeded highly. However, because of the sanctions, they were disqualified from the state tournament after the first week of the strike failed to create any traction between the CTU and the city of Chicago.

“It’s really frustrating for the players,” said Lake View soccer coach Jeric Johnson. “We started our training on July 9. We…had gone through conference schedules and the city tournament, and we won the PepsiCo tournament all in preparation for state. Because of what was happening with the strike, the kids were not able to play.”

CPS cross country teams faced a slew of obstacles regarding their eligibility, due to the sport’s extended season. Boys and girls teams were disqualified from the regional round of the state competition, but were reinstated to run in the sectional round after a ruling by Cook County Judge Neil Cohen that allowed them to run.

“I’m tired of adults making decisions that rob children of their childhood and their dreams,” Cohen said. “It isn’t going to hurt the IHSA to let these kids run.”

Because of the sudden addition of CPS runners to the sectional competitions, other athletes faced uncertainty as to whether they themselves would be eligible to compete: most prominently, the St. Viator boys cross country team. Initially, 13 runners’ spots in the State Finals were set to be lost and given to CPS students who could not compete in Regionals because of the strike. After deliberation, however, IHSA Executive Director Craig Anderson announced that the boys team as well as the individuals in jeopardy would again be eligible to run, alongside the qualifiers from CPS.

“We believe this is a fair recourse given the unique circumstance,” Anderson said.

Not only did the strike prohibit teams from finishing their seasons and advancing to the state level, but its impact also reached students personally. Senior athletes lost the opportunity for closure to their final high school season. For many athletes hoping to be recruited by colleges or earn scholarships, the state series would have been an opportunity to showcase themselves to college scouts and earn their spot on a college roster.

“There were four kids on my varsity roster hoping to play at [the] collegiate level,” Johnson said. “They had been in communication with a couple of schools and they had planned on some of those schools attending the state contest so they could be…potentially evaluated for college.”

“I would not be happy if I dedicated four years to a program just to be robbed of my final opportunity to compete,” said sophomore Paige Dzierzak.

The strike also impacted student athletes’ academics, which, in many cases, were previously driven by the motivation of competing in their respective sports.

“A lot of my guys kept up with their studies specifically so they could play soccer,” Johnson said. “When you have this huge interruption where they didn’t have school for [11] days and they missed out on what they thought was the final opportunity of their season, it’s a big let down. They’re going back to school and they don’t have a lot of the motivation they had…when they were working to stay eligible to compete.”

On Oct. 31, the strike officially ended and it was announced that CPS students will make up five of the eleven days missed. CTU members have since ratified a five-year contract with the Chicago Board of Education after the group’s longest strike in over 30 years.

“There’s nothing we’ll be able to say to any student-athlete that’s going to make it better,” CTU President Stacy Davis-Gates said.

While CPS athletes cannot replace their lost championship seasons, the CTU hopes that their actions will lead to positive improvements within the district in the future.