Why student athletes should say no to nicotine 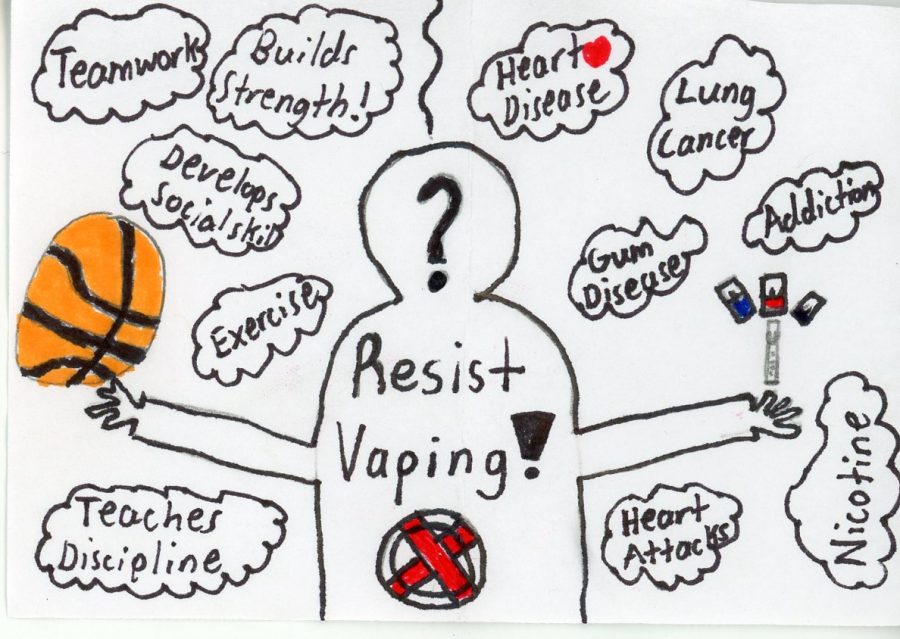 Sports can provide an avenue for students to stay healthy, socialize, and learn important life lessons. Unfortunately, players can have a negative impact on their teams with their unhealthy actions and habits. The epidemic of vaping is not limited to the school, but it is exemplified through its prominence in sports.

Sports themselves can bring people together, but some student-athletes are under the false pretense it is actually done by vaping.

“Before most practices, I would [vape] with some other teammates,” said one male junior. “We got closer by doing it.”

The promise of vaping encourages some student athletes to join or continue a certain sport.

“It’s definitely a factor,” said another male sophomore. “I do [the sport] partly because of the opportunity to vape. I have friends on the team, but [the sport] doesn’t really interest me. It’s more of what is associated with it.”

Vaping remains a prominent in sports because some student athletes believe, despite the administration’s eye-opening anti-vaping curriculum, that nicotine use has no effects on their performance.

“It doesn’t affect me,” said the male junior. “If anything I got better than last year. Only one of my friends that [vapes] had a bad cough during the season, and I don’t think it had to do with it.”

Despite some members of a team choosing to vape, a positive is that others are resisting peer pressure and avoiding vaping.

“It’s more like pockets of the team,” said the male sophomore. “Some do it, some don’t. But there isn’t any pressure to vape really. It’s a personal choice.”

However, vaping is less prominent of an issue among girl’s sports.

“Sure, girls do it too,” said a female sophomore. “But I don’t think it’s as big of a deal as it is with boys. It’s not specifically before games or practices or directly connected to a sport. It is just a personal thing and whoever does it, does it.”

The athletic department is aware of the issue, and coaches fight against the use of vapes.

“The coaches are advocates for the school,” said athletic director Mr. Jason Kuffel ‘99. “They teach young student athletes to be smart and proactive about what they are putting in their bodies. I think the coaches do a nice job of saying…how it will affect you in your performance on the field for your team and how others see you as a person.”

However, there is room for improvement. The athletic department believes more knowledge on the effects of vaping would be beneficial in the fight against it

“We are still learning what vaping does to the human body,” said Mr. Kuffel. “There have been some reports because of e cigarettes and vaping. As it becomes more of a researched product, we will be able to learn more and more about it and put more language behind it and what it does to the body and brain. We know it’s not good but not what the long term effects are.”

According to a study, vaping for 30 minutes has the same effect on the human aorta as smoking for five minutes.

Administration is also fighting against vaping within the school. They have maintained the consequences for students caught vaping, which affects their participation in sports.

“We have had the same policy in the past,” said Dean Fuja. “If a student is caught vaping or with any vaping devices, they will receive a Saturday detention and two week social probation on the first offense.”

However, the administration is making steps to improve the fight against vaping beyond punishments with the help of students.

“We just had the smart choices curriculum,” said Dean Fuja. “This idea came from the SADD club where one member knew students who wanted to quit but didn’t know how. What we did was take the idea of a student turning in a vaping device. If a student turns in a device, there are no consequences.”

Even with the new programs implemented, they are not perfect.

“As with all things that are done for the first time, you learn from experience and see how you can improve in the future,” said Dean Fuja. “ From student feedback, freshmen were engaged but sophomores, juniors, and seniors did not feel it was as relevant and knew a lot about the topic, so maybe making it in smaller chunks and differentiating the activities could be helpful.”

Also, administration recognizes an issue with lack of trust, which will be built in a slow process, but is hopeful. The goal of the new programs is to encourage students to avoid devices that cause possible unknown harm to the body, and reverse the increase of e-cigarette use in youths. According to the CDC, 27.5% of high school students have vaped in the past month, a change from 21% in 2018.

“Two people have turned in devices and they have not received consequences,” said Dean Fuja. “When students take a step toward a healthier lifestyle, we want to reward that.”