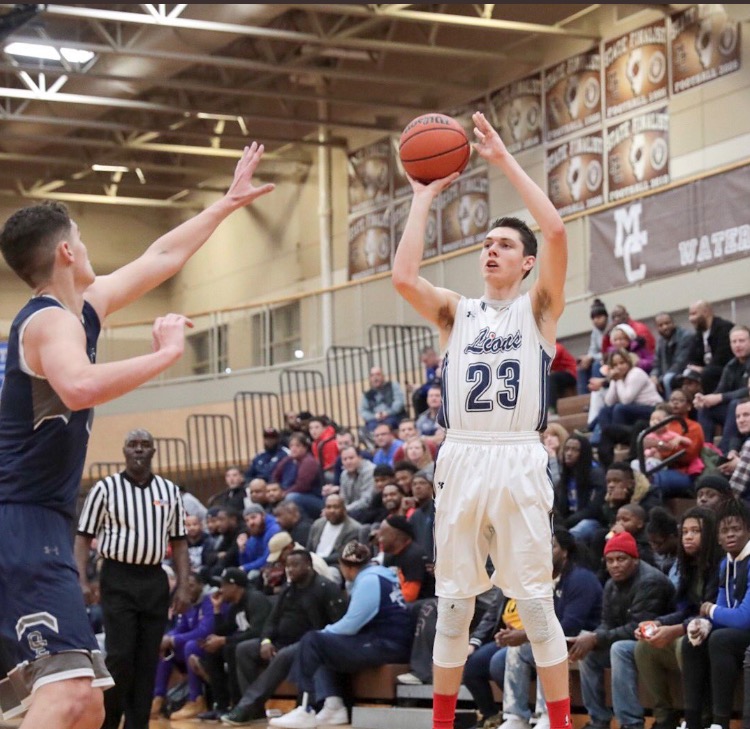 As the fall sports season comes to a close, many seniors play their final games as high school students. Next year, they will not only continue their education in college, but some will also continue their athletic career.

For some, playing a sport in college has been a goal for most of their lives.

“I wanted to continue to play lacrosse in college because ever since second grade, it has been my dream to be on the college field in front of fans and playing on TV,” said junior Serefina DeMunno, who committed to playing lacrosse at Northwestern. “I’ve always wanted to make it to the NCAA championship or win the championship…I know it’s a possibility with a team like Northwestern.”

Other students choose to continue their athletic career because they thoroughly enjoy the sport.

“I want to continue playing basketball in college because I love the game of basketball,” said senior Connor Kochera, who committed to William and Mary for basketball.

Others want to continue to challenge themselves.

“I wanted to play for a challenge at the next level,” said Mrs. Jennifer  Kottra ‘00, who played basketball for Lake Forest College. “Not everyone has the opportunity to play a college sport, so I wanted to prove to myself that I could do it.”

For colleges to notice them, student athletes need to make an effort to express their athletic ability outside of the school season in other leagues.

“I played in a competitive AAU team,” said Mrs. Kottra. “Most of the scouting occurred there rather than through the school. We would purposefully play in tournaments over the weekend where many coaches were there from all across the United States.”

Within different leagues, there is a higher chance of college scouting because of coach connections.

“I was extremely blessed with the AAU team that I played for and the connections that my coaches had,” said Kochera.

Another way to display interest in playing at the collegiate level is to visit different schools and be active during the visits.

“After the first visit, I got the hand of asking certain questions and honestly just having fun with this process,” said DeMunno. “I scheduled my visits one after the other and to end with Northwestern.”

The college recruitment process can be a very stressful process for student athletes.

“The recruitment process for basketball is very time consuming,” said Kochera. “As stressful as it was, I tried to enjoy every moment of it because it only happens once.”

Role Models, such as coaches and parents, support student athletes going through the process.

“I received 22 phone calls in the first day, which was overwhelming, but I had my parents on my side and my coaches helping me along the way,” said DeMunno. “My parents told me that this is the one time in your life that you are wanted by this many people so enjoy it.”

Student athletes playing in college must also be prepared for the busy and exhausting lifestyle of a college student athlete. At the collegiate level, a student athlete learns the importance of responsibility and time management.

“It definitely forces you to manage your time,” said Mrs. Kottra. “You’re managing academics, athletics and your social life too. Whether it is D1 or D3, you live and die by that sport, so you really need a balance. A positive is that it also builds mental strength because it is draining.”

The life of a college athlete is not always glorious. There are some negatives.

“It is a huge time commitment,” said Mrs. Kottra. “That is in some ways a negative because sometimes my friends would be going out, but I couldn’t because I had a 7 am practice or a check in at night. Not letting the stress of playing a college sport get to you is also difficult.”

A student athlete should like the team as well as the school.

“Make sure you love the team and the school,” said DeMunno. “When you play a sport in college your team is your life. If you don’t like your teammates than you will not enjoy yourself. With the school, say you are injured and can’t play the sport anymore, you still have to go to that college. If you don’t love that school then I think you would have a hard time finishing out.”

“Simply work as hard as you can,” said Kochera. “It takes a lot of sacrifice to play at the collegiate level, but if you really love the sport you’re playing it’s worth it.”