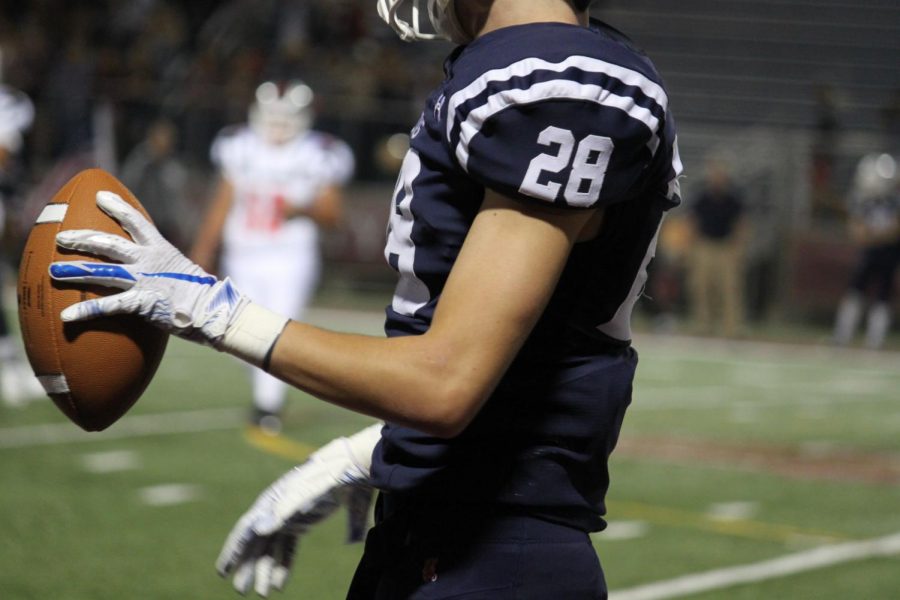 Senior Owen Hickey recovering the ball after a pass

Everybody knows that last year’s football team struggled. They finished the season disappointed with only one win. As the weeks went on last season, people disappeared from the bleachers. However, when the football team ran onto the field for the home opener against Prospect High School, the student section exploded. Fans seemed to be starving to watch their team compete. The players sprinted down to the student section. Just like the fans, they were hungry for a new season with an opportunity to win games and change the connotation of the name Saint Viator Football.

This goal has come with many tasks, one of them being the need to get physically stronger.

“Numbers in the weight room have increased which translates on the field because guys (on the team) are physically handling their opponents with a lot more power,” said junior lineman Jeremiah Pittman.

Not only have players rallied around this notion of developing strength, but the coaches have as well.

“After the season ended there was a need for a culture flip in the weight room,” said Coach Archibald, the head coach of the team. “So much of football comes down to strength and speed that we decided to start (lifting) a week after the last game. We switched to four lifts a week instead of three lifts a week and it has made a difference on the field and brought the team closer together.”

“[The team] did not panic in the first two games of the season when Prospect and Clark scored first,” mentioned senior linebacker and running back Parker Hellgeth.

The players clawed their way back to take the lead in both of the games.

“Football is a four quarter game,” Hellgeth said. “The thing that sets our team apart is that we are really able to control our attitude and effort.”

This has become apparent to fans by how their team continues to fight even when they are down.

In short, the team is off to a much better start this year thanks to their hard work, strength, and toughness. The fans can feel how this team is truly special and has unique qualities. If there is any year to pay attention to the football team, this is the year.