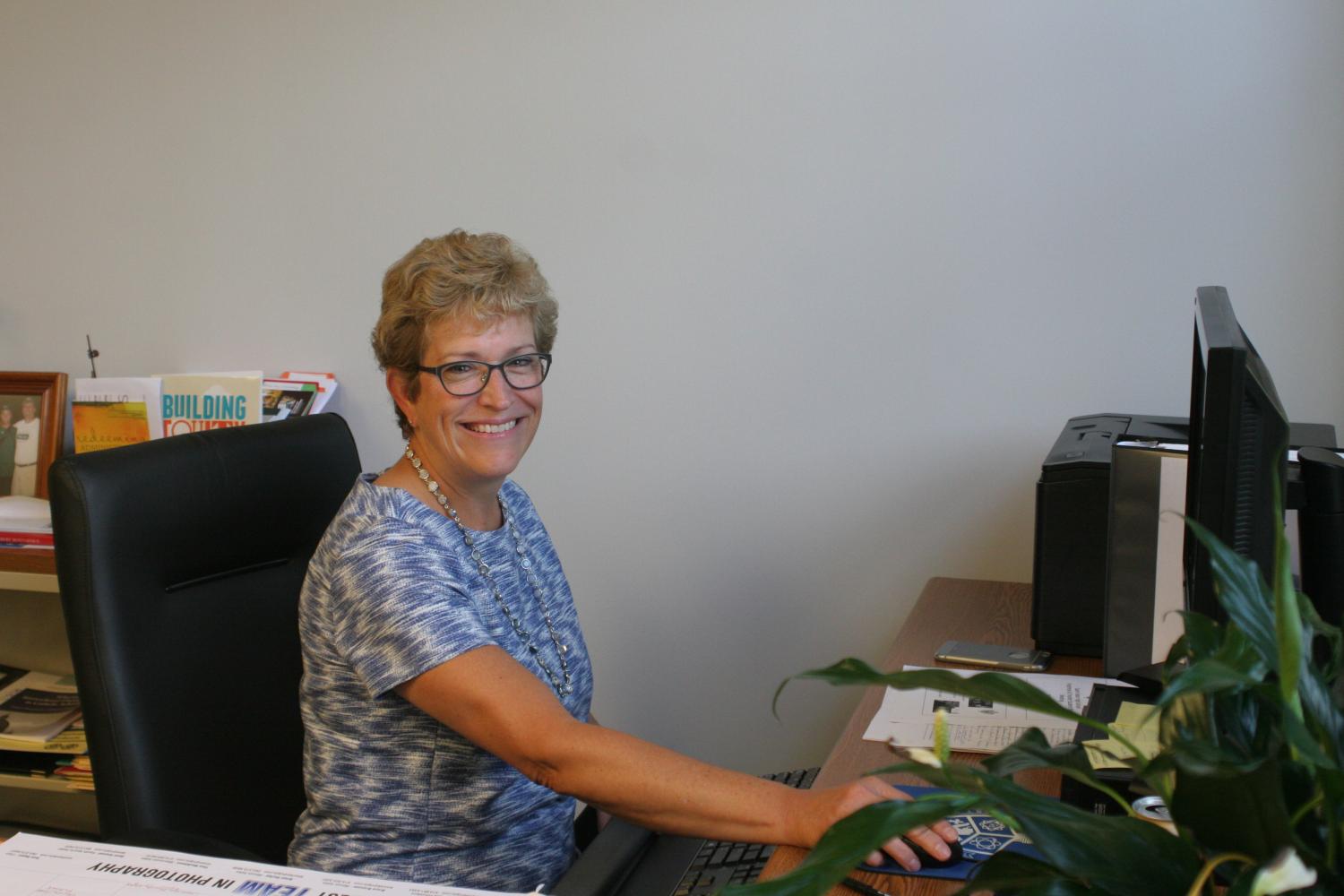 While most students are not fond of going back to school, they are certain to love the new principal, Mrs. Karen Love. She began her career in education working as a math teacher for 14 years at a Jesuit school in Portland, Oregon. However, for the past five years, Mrs. Love worked as one of three assistant principals at Loyola Academy. When the job opened for principal at Saint Viator during the past year, Mrs. Love saw an opportunity to further her involvement in  school administration.

With encouragement from others and the feeling that she had more to contribute in the academic world, Mrs. Love applied for the position of principal. Before being hired, her connections to Saint Viator were mostly word of mouth. Within her community, she heard about the network of people who know Viatorians and felt a calling to get involved.

“[The network] reaffirmed that I was intended to come here, that this could be where I call home,” Mrs. Love said.

On July 10th, Mrs. Love began her first day as principal, but much preparation went into the transition before that date. Mrs. Love met with former principal Mrs. Eileen Manno and walked through what would be expected from the principal, including exchanging contact information and familiarizing Mrs. Love with the other staff. Mrs. Love still remains in contact with Mrs. Manno.

Mrs. Love also noted she has something in common with the Class of 2021.

“I feel like I am a freshman this year, too,” she said. “We are starting here together.”

Despite the planning that went on, Mrs. Love stated that “there is no typical day” as principal. Between meeting new students and carrying out her duties, everyday unfolds differently than planned and keeps the job interesting.

“I am excited to get to know her better and see how she can make Saint Viator even better,” said junior Kiana Resch.

According to Mrs. Love, getting to know the students and working with constant schedule change allows her to “keep in sync with the life of the school. The more in tune we [the administrators] are, the better we are.”

The connection with the students is one of the main reasons that Mrs. Love became involved in school administration.

“I view it as being a servant leader—that I can help bring about change in the lives of young people and create a future for the students,” she said. Thus, she takes into her position her goals of encouraging students to problem-solve and serving her community.

Mrs. Love also has the goal of preparing students with the skills they need for the future

“I am excited to learn more about the technology integration at Viator,” she said.

Her experience with iPads in the school environment began when she worked at Loyola Academy, which previously initiated the same one-to-one iPad program that Saint Viator currently utilizes.

“I am glad she worked with iPads before,” said junior Emily Goebel. because they are important for us as students, especially to stay up to date with technology,”

Mrs. Love cited the foundation of skills that students receive from using iPads in the classroom.

“I feel like it is hugely important to provide the twenty-first century skills,” she said. “It is not about the device; it is the skills translated.”

Even though iPads may not be favored by the whole student body, most people can agree that the new school year comes with a number of uncertainties, ranging from locating their classrooms to determining what to write about in their college essays. Likewise, Mrs. Love finds herself encountering unknown aspects of Saint Viator.

“Right now, I am seeking the answers,” she said. “There is a lot to learn.”

While she is currently still getting to know the school and the students, Mrs. Love also said how she is looking forward to “experiencing all of it [Saint Viator traditions], looking in the yearbooks, attending the musical, and just getting a deeper look into the life of the school.”

Although there often seems to be a disconnect between principals and students, Mrs. Love stresses the importance of the administration being in sync with the students. Yet, students do not always go out of the way to get to know their principal. In fact, Mrs. Love is similar to many students currently walking the halls of Saint Viator. She grew up in Elmhurst, attending York Community High School. Like many, Mrs. Love favors dogs. She has a large breed, known as a Leonberger, named Kona. Additionally, her favorite food is sushi, and her favorite subject in school is math.

While she may be part of the administration now, Mrs. Love participated in orchesis and yearbook committee throughout her high school experience, becoming co-editor of the yearbook her senior year. She went on to study at the University of Illinois and, due to her enjoyment of mathematics, worked in Atlanta at a computer science company doing programming.

Although she still is discovering the ins and outs of Saint Viator, Mrs. Love affirmed, “I am excited about being able to collaborate with others and co-lead a strong school.”